WHY PURCHASE AN INFINITI VEHICLE? 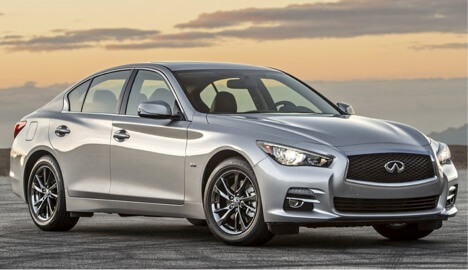 Modern consumers know what they want in a car, but they often still question which brand they should choose. Those who spend time at INFINITI dealerships spend more time asking the question, "Why not go with an INFINITI?" INFINITI has established its competence through a clear historical dedication to excellence, innovation, and appreciating its customers.

Every journey begins with the first step. INFINITI's origins began as a thought experiment among a handful of Nissan higher-ups in 1985: How can we make a luxury car that rivals those in the American and European markets? They believed a more human-centric philosophy would pave their way to success.

Two years later, they chose their iconic name. 1987 was the birth of INFINITI and the commitment to a never-ending path of improvement. Their logo of roads paved into the distance embodies the long-term vision and dedication the founders have toward improving their products.

In 1989, another mere two years down the road, the company launched with 51 dealerships across the state. Their two flagship models included the spacious Q45 sedan and the M30 coupe focused on performance. The INFINITI Total Ownership Experience program helped make the growing organization famous for excellent customer service and satisfaction.

Ten years of growth and success led to INFINITI's decision to further support their dedicated customers. The INFINITI Owners Club was added in 1999 to their highly regarded Total Ownership Experience as an additional items to loyal followers. They received exclusive travel opportunities and coveted special offers.

Technological improvements truly began to change the world after the turn of the millennium. In 2002, the company implemented voice recognition in their vehicles' suite of features. INFINITI drivers could now control essential functions of their car without having to lift a finger.

INFINITI's persistence to add cutting-edge tech to their vehicle lineup solidified their ranking among peers. The G35 sports sedan and sports coupe launched in 2003 with amazing success. Car and Driver ranked it in their top-ten list, and INFINITI was the fastest growing U.S. luxury vehicle produced by the end of the year.

INFINITI saw massive growth during the 2000s and 2010s. They continue to build on their strengths and offer over 230 global dealerships as of 2015. INFINITI's presence has never diminished since its inception. The company adopted a new alphanumeric naming convention to convey its dedication to future strategies that benefit all of their customers.

INFINITI is a relatively young company in the auto industry, but it's taken the market by storm. Our vehicles are designed to satisfy the consumer searching for a vehicle that offers something extra.

INFINITI models have a wide variety of models and trims, impeccable performance features, high-end sound and infotainment systems, stylish interiors and exteriors, and the most modern safety equipment on the market.

Additionally, their hybrid models are highly efficient without sacrificing as much power as their competitors. Potential buyers can rest assured because of INFINITI dealers' legacy of excellence and forward-thinking.

INFINITI's are incredible vehicles with great looks, great longevity, and killer features. If you're ready to take one for a spin, call INFINITI of Thousand Oaks for a test drive.

WHY PURCHASE AN INFINITI VEHICLE? - INFINITI of Thousand Oaks